Finishing an Ironman* is Easier Than You Think. Seriously.

*It was a half-Ironman actually, but I thought that complicated the title of this post and didn’t make it sound as cool. 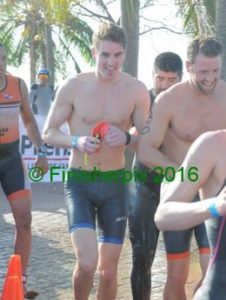 This post will give the basics on how to train and get started in completing the race or any triathlon. (Hint: It is really not as hard as you think). All of this is seen from my perspective from participating in a half-Ironman race in Panama City, Panama on January 31, 2016.

Disclaimer: If a doctor, more experienced friend, or triathlon blog has sound advice from, ya know, actually knowing more about this topic then I do, I would highly recommend listening to them. This post is merely my personal anecdote and somewhat ridiculous tale of why and how I did it.

So, what does a half-Ironman consist of?

Like all other triathlons, it consists of three parts:

*Double all of these and you have the full Ironman. AKA “way-too-fucking-long” in comparison to the half Ironman which is “fucking long”

The story begins on a beautiful August day in the town of Yucaipa about 75 miles east of Los Angeles. My fire crew and I were moved there from southern Arizona to be on standby in case fires popped up as they were expected to with hot and dry conditions forecasted for the region. This day however, had started with some games of volleyball and a false smoke report that we responded to. By late afternoon I found myself daydreaming about what I would do with my life with the end of fire season rapidly approaching. At some point I thought it would be a good idea to glance at my list of life goals I had started writing three years prior, and one of them was to complete a triathlon. The usual fear-response to this type of possibility would have gone something like this:

“That is something that true men do, and you aren’t one. You are a little pussy, pussy.”

“You aren’t strong enough to finish one”

“You aren’t tough enough to finish that, who do you think you are?”

“You will probably get last place and everyone will laugh at you.”

Luckily for me, I had been doing all types of positive shit for myself that week so that douche of a voice didn’t even register. Instead, I called one of my best friends Ryan and constant “yes” man in my life. Our conversation went a little something like this:

“Hey man, what are you doing?”

“O, right, well I have a quick question for you. There is a half Ironman on my birthday in Panama. We can do it and make a little vacation out of it. What do you think?”

“Uh ya, that sounds cool. How much does entering the race cost?”

“Ya cool let’s do it. I will call you later, I have a meeting coming up and have to go.”

I love that guy. Now I could prove to myself I can finish one of these things and have a great goal to work towards. So once fire season ended in late September, the plan was to train October 1st-end of January, giving us about 4 months to get in Ironman shape, which leads me to…

All of these tips are what I did, for better or worse. The point of it all is to show you that it doesn’t have to be a complicated, extreme task to complete one of these races. I am not an avid runner/biker/swimmer and had never swam laps in a pool before this. I did cross country in high school and kind of sucked at it, mainly due to trying to chase girls instead of the guy in front of me. I do, however, lead a fairly active lifestyle and was 26 at the time of the training. Everyone is different. With that being said, this training assumes that the participant is already in decent shape and at a healthy weight before starting. I also want to make clear that my race was at sea level and the entire course was basically flat, something I did not know when signing up but was very happy to hear about. OK, so here we go…

To start, here is the free training worksheet I found online:

Notice the words “super simple” in the title. That’s what all of this is about. This training does not have to take over your entire life and turn into a stressful, numbers crunching debacle about calories burned, nutrition intake, BMI calculations, sleep acquired, color of your swimsuit, or anything else designed by the mind to distract and overwhelm. Just slowly get started and roughly follow the guide.

What you will need:

I didn't ride a real bicycle or swim in open water a single time before the race. A little stupid? Maybe. Naive? Yes. Did I get a really good time in the race? No, but I was able to finish relatively painlessly which was why I did the race in the first place. For the experience of doing the damn thing.

So, to keep things simple like the title of the regimen, get the few required items and start 16 weeks out. Seriously, that is all you have to do. The hardest part will be the first lap in the pool. Brrr. 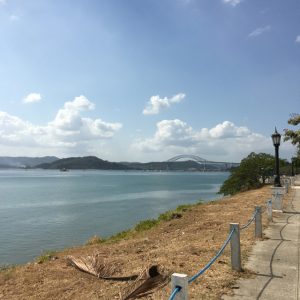 The first day I got in the pool, I was sure I was going to look like a buffoon Jack Dawson’ing it up and splashing water everywhere. I had not swam laps in…years? Ever? I couldn’t remember. I knew how to do the freestyle basically well though. So I swam to the other side of the pool, and was fucking exhausted. Holy shit, I have to swim 1.2 miles in 4 months?! This might have been the dumbest thing I have done, what kind of mess did I literally sign myself and my buddy up for? So then I swam to the other side and took another break. I did that until the prescribed distance was done. That is basically how the rest of my swimming training went for the next 4 months, slowly building up to being able to complete the distance on the sheet. Some days I did more, a lot of days I cheated and did not do enough, and some days I decided to say no the pool entirely.

I used the stationary bikes inside the gym because I did not have access to a nice road bike and frankly, I do not enjoy riding a bicycle on the 2 feet of pavement separating me from becoming lunch for a semi truck on open roads. You can change the intensity, duration, and most gyms will have fancy-schmancy stationary bikes that will actually take you on a virtual tour of roads while you pedal, complete with hills and windy turns that the bike automatically incorporates into the workout. Pretty cool, and you can do all of this when the weather is terrible. (That means all year for you midwest/east coasters/southerners)

Sometimes treadmill, sometimes outside. I had a serious ankle sprain in August that never healed entirely so I actually did not start running until about 2 months into this training, something that I would not recommend as the run became very difficult towards the end since my body was not properly conditioned for it. Thank god for bananas and water.

To summarize everything: The swimming, which I was the most worried about, turned out to be the easiest. Helped that this section of the Panama Canal was calm and we had the current with us. The bicycle was the hardest mainly due to the heat and the duration of time spent on it. The running was simply putting one foot in front of the other and in my case, not very quickly. 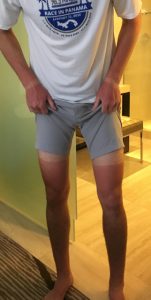 The heat and humidity definitely took a toll on both of us but I had been going into a sauna 4 times a week throughout the winter and was extremely conditioned for the heat from it. Ryan, having getting scorched on the bike portion, was fatigued and dehydrated and unfortunately had no choice but to quit on about mile 4 of the run. I briefly thought of doing the same but then came up with a plan that kept me “easily” going and able to finish.

I borrowed the technique from my good friend Dave Vitullo who is a brain cancer survivor and I have had on my podcast (listen HERE) . He told me to that during his battle against death, he simply survived each day and celebrated his small victories. Do a little bit at a time. By the last five miles of the run, I did exactly that by running for five minutes and walking for one. Running for five minutes and walking for one. Over and over and over again while downing water and gatorade at the hydration stations to ward off calf cramps I could feel approaching. Eventually I reached the finish line in anticlimactic fashion by myself, although the spanish announcers did say my name decently well as I crossed. 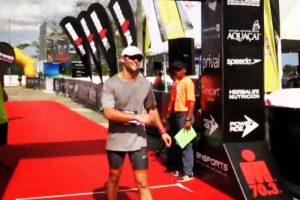 Ryan and I spent the next two days gingerly walking everywhere and drinking/eating our way around Panama City which, if you haven’t visited, is a gem of Central America and has amazing food, sights, and people to offer.

Questions, comments, or shit-talking about my process for the race? Thinking of embarking on your challenge? Let me know below!

Want to rewrite the rules to parts of your own life and create it on your own terms?  Subscribe to my email list on the side or bottom of the page to get weekly updates on inspirational books, ideas, and when to check out the podcast for the freshest episode!